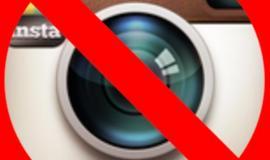 Just days before Lift Cannabis Expo took place this past weekend in Vancouver.

Lift Cannabis is a news and review site for medical cannabis that only does strain reviews for legal weed available through licensed producers. According to Lift, none of the photos posted to its Instagram feed depict recreational or black market weed.

Still, near the beginning of September, Lift communications director David Brown said he attempted to log into the company's Instagram account and found that the page had been deleted.

Immediately Brown told VICE he filed a report with Instagram that said the account had been deleted unfairly. He'd already been through the process once before in 2015. Back then, Instagram responded to Brown's complaint by reactivating the account and apologizing for the inconvenience. But this time around, Brown said it's been the opposite. For nearly two weeks he heard nothing at all from the company. Then, when he tried setting up a new account for Lift, one that didn't feature any images of cannabis, that too got deleted.

Instagram did not respond to VICE's request for comment. According to the company's Community Guidelines, "Offering sexual services, buying or selling firearms and illegal or prescription drugs (even if it's legal in your region) is also not allowed. Remember to always follow the law when offering to sell or buy other regulated goods."

"Nothing we're sharing is against the law," he said. "Instagram is a US-based company. I suspect they don't really understand the rules involving Canada."

Lift isn't the only company to be targeted by Instagram.

Tweed, Canada's largest licensed producer, had its account shut down twice. Tweed spokesman Jordan Sinclair told VICE he asked Instagram if there was any way to retrieve older photos that were deleted with the first account.

"That's actually the part that stung the most," he said. "We had some cool stuff that we snapped when we were converting the chocolate factory to the grow op and now those little pieces of Tweed's history are just gone."

Sinclair said Tweed decided not to open up yet another Instagram account because the Community Guidelines are too vague. "The work it takes to build an online community isn't worth it if there's the constant risk of it disappearing," he said, noting Tweed is focusing on Snapchat and Massroots as alternatives.

Brown said with rules around advertising cannabis being so strict, Instagram can be a vital marketing tool.

He pointed out that many dispensaries—which promote weed that's technically still illegal—still have accounts that are intact. Cannabis Culture, which sells recreational weed in Vancouver and Toronto, has had its account deleted in the past, but is currently operational. Same with Leafly and Weedmaps, which both review dispensary weed. High Times, a cannabis magazine that depicts recreational weed trends in America and has 1.3 million followers, also hasn't been touched.

"So a company that operates with the entirely legal medical cannabis space in Canada gets deleted, twice, but a company that cover the federally illegal recreational culture in the US and around the world gets a pass," Brown said. "No rhyme or reason."

Brown said Instagram is either applying its rules arbitrarily, or is basing its decisions on user reports, which means anyone could report their competitor's account to have it shut down.

This article was originally published by VICE.