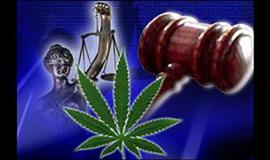 Inside CannaMart, a Greenwood Village "wellness counseling" center that connects medical- marijuana patients with the medicine they seek

The conflict between federal and state rules puts medical-marijuana clinics and local officials in a legal limbo.

Inside CannaMart, a Greenwood Village "wellness counseling" center that connects medical- marijuana patients with the medicine they seek, there are the usual posters of marijuana leaves and pro-pot messages. But there is also something else: boxes in various states of packing.

CannaMart is moving, driven out by the difficulty of getting a business license in Greenwood Village. Because the sale of marijuana violates federal law — even though Colorado voters approved a medical-marijuana amendment to the state constitution in 2000 — Greenwood Village considers the business to be in violation of its public nuisance ordinance.

"I'm going to lose a lot of patients," Stan Zislis, CannaMart's owner, said of the upcoming move. (He won't say where he's moving to). "They're denying people's rights, basically."

In the months since the Obama administration said it would respect state medical-marijuana laws when it comes to federal drug enforcement, dispensaries have openly proliferated in the Colorado — now numbering perhaps as many as 100.

But with state officials saying they have no authority to regulate dispensaries, local governments across Colorado have been rushing to fill the regulatory vacuum, creating a wildly varying patchwork of rules for dispensaries.

On one end, for instance, Aurora has joined Greenwood Village in arguing that dispensaries are not allowed in the city.

"For now, absent any direction from the court, we will be following our long-standing business-licensing rules that require all businesses to be lawful," said Aurora spokeswoman Kim Stuart.

At the other end are cities like Boulder, which has no regulations for dispensaries and no plans to impose any.

"At this point, we don't have any proposals before council," city spokesman Patrick von Keyserling said.

Dizzied by the tornadic confluence of federal and state law, a number of other cities — including Englewood, Northglenn and Breckenridge — have placed moratoriums on new dispensaries so they can study whether to impose zoning or licensing requirements. Officials in Commerce City, Steamboat Springs and a number of other mountain communities are also examining the issue.

"It's just difficult when there's a conflict between federal law and a state constitutional amendment, and we're stuck in the middle trying to reconcile those two," said Northglenn Mayor Kathleen Novak.

While Amendment 20 — the 2000 voter-approved measure that legalized medical marijuana in Colorado — makes provisions for patients or their "caregivers" to grow and possess marijuana, it says nothing about dispensaries, many of which operate on a retail business model. How dispensaries should obtain and sell marijuana is still a legal gray area. Confidentiality rules surrounding the medical marijuana registry add another layer of complexity.

"I don't think there's much debate over the fact that we don't have any authority over dispensaries," said Jim Martin, the head of the state Department of Public Health and Environment, which maintains the registry.

So shabby is the regulatory vision for marijuana dispensaries that some cannabis advocates have banded together to form a policy group to propose regulations.

"I don't know how much the city governments, the county governments have the patients' best interest at heart," said Laura Kriho, the outreach director for the Cannabis Therapy Institute. "That's what we want to do; we want to protect the patient."