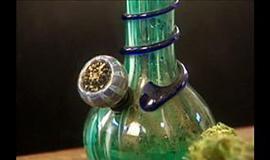 Yet, in October, the city of Centennial decided to close down his East Arapahoe Road office down.

"How can a city just stop a Constitutional right?" he asked as he spoke to reporters outside of the Arapahoe County Courthouse on Friday.

It was the same day he, a group of lawyers, and a number of CannaMart's patients went to court to try to get a judge to re-open the now shuttered facility.

CannaMart lawyer Bob Hoban said the shop had a proper business permit and even paid Centennial $1,500 in sales taxes.

Centennial closed CannaMart down, in part, because it was selling what city leaders consider to be an illegal drug under federal law. City management also believed the facility was not allowed under the neighborhood's current zoning regulations.

Centennial attorney Andrew Nathan said CannaMart's business license was invalid because the business said only that it would sell "medical/health care products," not marijuana. The name "CannaMart," derived from "cannabis," wasn't used on the dispensary's initial paperwork.

The legal case will likely be closely watched by political leaders all over the state, because it gets at the very heart of what cities can and cannot do with regards to medical marijuana dispensaries.

Zislis said on Friday he could have his business up and running again in "48 hours or less" if the judge gave him the go-ahead. He is seeking a temporary injunction in the matter.

He will not get that chance right away. Friday's hearing went longer than expected, and the judge decided to continue the matter until Wednesday.

The matter is part of a larger lawsuit that pro-medical marijuana attorneys hope will help clear up some of the grey area clearly apparent with the interpretation of Colorado's Amendment 20. Colorado voters approved the medical marijuana amendment back in 2000.

While Amendment 20 speaks a lot about medical marijuana, it speaks very little about who is allowed to distribute marijuana. The word "dispensary" is not found within the wording of the amendment. Politicians and even the state's board of health have tried to clear up the matter in recent months.

State legislators have promised to take up the matter early next year.