Cannabis companies are the leading sponsors of Colorado highways, accounting for cleanup on two-thirds of the roads maintained by Clean Colorado.

Currently, 51 cannabis dispensaries, cultivators, manufacturers and edible producers sponsor roadways throughout the state, according to data from the Adopt a Highway Maintenance Corporation.

Though they represent less than half of all organizations that participate in the Clean Colorado program, those cannabis firms’ reach spans about 198 miles, or 66% of the roads actively sponsored, The Denver Post reports.

The business category with the next highest level of participation is general services — ad agencies, pest control, plumbing, real estate — which represents 13% of miles sponsored. Other sponsoring industries include retail (8%), restaurants (4%), and casinos and hotels (3%). 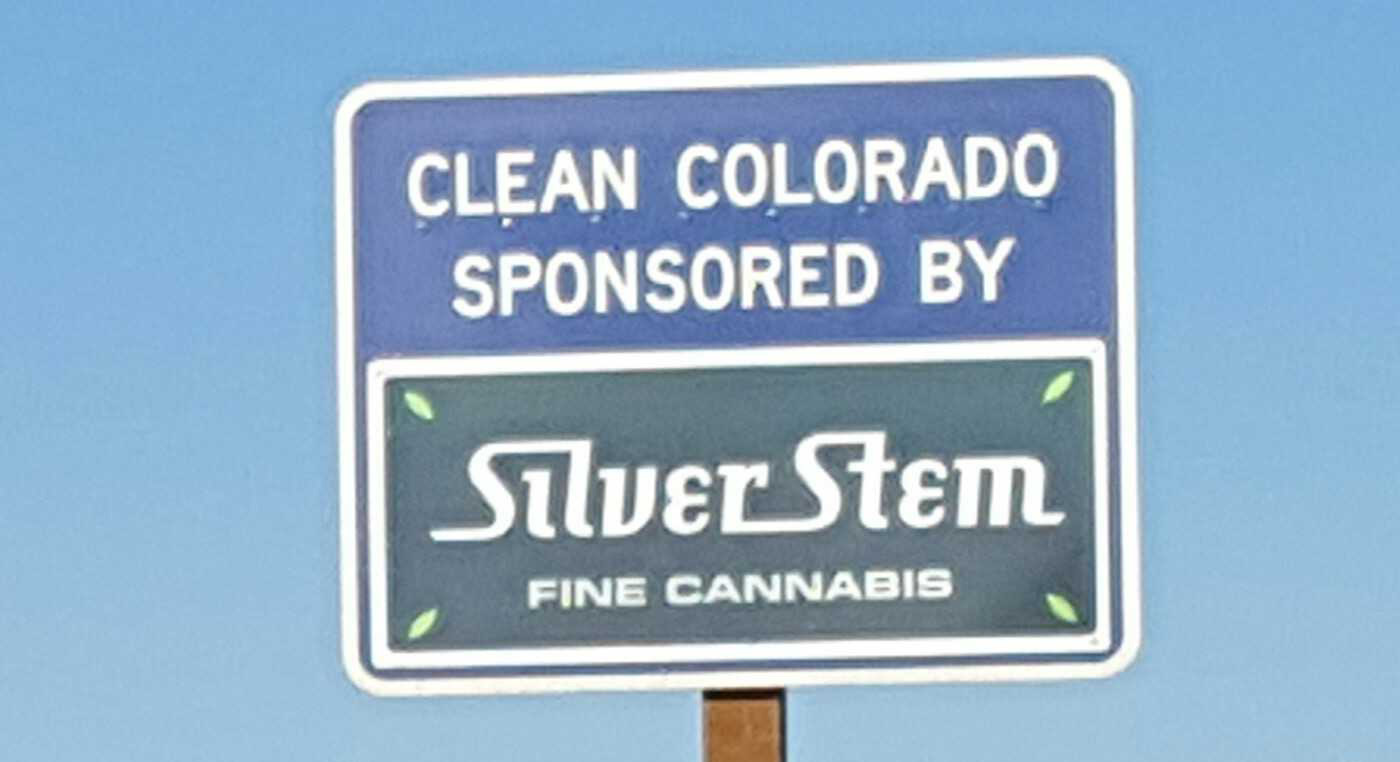 Silver Stem is a proud sponsor of clean highways

Drivers in the Denver area likely have noticed. Clean Colorado signs with the names and logos of local dispensaries and grows dot most major highways here, and often are strategically placed near exits where passersby can find the businesses. That’s no accident.

Colorado’s rules governing how and where cannabis companies can advertise are famously strict. In an effort to prevent marketing messages from reaching minors, state regulators prohibit canna-businesses from advertising on TV, radio and in print unless they can prove the audience is predominantly 21 and older.

Digital and social media platforms are even more restrictive — and not just in Colorado, which bans cannabis-related pop-up ads. Post something that violates often-ambiguous advertising protocols, and Facebook and Instagram will shut down a company’s account.

That’s one reason Sponsor a Highway, a cousin to the better-known Adopt a Highway program, is a magnet for marijuana. The Colorado Department of Transportation says the signs are not intended to be an advertising medium, but they have become a clever workaround for an industry with few other consumer-facing options.

The first Adopt a Highway sign was erected in east Texas in the 1980s after a grassroots effort to rally volunteers to clean litter along roadways. As the need for litter-removal increased, the program expanded to offer businesses an opportunity to pay for bigger and more frequent cleanups, said Patricia Nelson, president of Adopt a Highway Maintenance Corporation, which manages sponsorships in 22 states, including Colorado.

Though they are close in name, Colorado’s Adopt a Highway and Sponsor a Highway programs are slightly different. The first enlists groups of volunteers to pick up litter twice a year, Nelson said. As of November, 1,080 volunteer groups had adopted upward of 1,700 miles in the state, according to the Colorado Department of Transportation.

Organizations in the Sponsor a Highway program, by contrast, pay a fee that covers the cost of a cleanup crew in exchange for a sign with their name and logo on the side of the road. Prices vary by roadway and how frequently they are used. The busier the highway, the more it needs to be cleaned — and the more people are potentially exposed to a brand.

The state doesn’t make a profit from or spend money on the Sponsor a Highway program, but rather saves money by outsourcing cleanup services on the sponsored stretches of roadway.

Officials with Adopt a Highway Maintenance Corporation declined to say how much money they take in each year through Colorado highway sponsorships.

Because Clean Colorado signs don’t look like traditional advertisements, they might be one of the most effective ways to reach drivers, said Harsha Gangadharbatla, associate professor of advertising, public relations and media design at University of Colorado Boulder.

“They’re a different kind of signage on the side of the road, they tend to stick out a little bit more than billboards, so consumers do pay a little bit more attention to anything that’s novel or different from the formats they’re used to,” Gangadharbatla said.

The message they send is also different from the average sales pitch.

“It presents marijuana stores in a positive light,” Gangadharbatla said. “The money made from marijuana is put to something good, like keeping up roads and transportation that everyone uses.”

Still, not everyone is pleased. The program recently sparked outrage among authorities and residents near Aspen after Dalwhinnie Farms, which grows marijuana in Ridgway, sponsored a portion of Highway 82, according to The Aspen Times. Pitkin County Manager Jon Peacock and county Commissioner Patti Clapper lambasted the Clean Colorado signs for promoting marijuana use and obstructing scenery. (The county hasn’t allowed billboards or highway advertisements “for decades,” Peacock wrote in a letter to transportation authorities.)

Drivers may begin to see more blatant advertising from cannabis companies, thanks to a new law that took effect Jan. 1 that allows them to leverage outdoor media, such as billboards. Legalized as part of the 2019 Sunset Bill, marijuana advertisements would be prohibited within 500 feet of schools, places of worship and playgrounds and still be subject to local regulations.