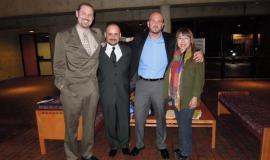 Dispensary gets license after lengthy battle

CannaMart’s three-year battle with the city appears to be nearing an end, thanks to an open slot in the four-dispensary limit.

The Littleton Licensing Authority voted unanimously March 13 to approve the dispensary’s medical-marijuana license after a deal was worked out that will hopefully settle a lawsuit that’s been ongoing since June 2010. CannaMart’s owners sued the city after it was denied a license despite being operational since September 2009.

“I assume litigation would continue if this is not approved,” said Bob Hoban, CannaMart’s attorney.

Deputy City Attorney Kristen Schledorn says she hopes this will settle the matter. In November, the state appeals court affirmed the district court’s ruling that the city’s licensing authority properly denied CannaMart a license. CannaMart asked the Colorado Supreme Court to review the case in December and had been waiting to find out if that would happen.

Council limited the number of dispensaries in city limits to four in January 2010. At the time, there was disagreement between the licensing authority and the city manager as to which four of the six that had set up shop were operational first. City Clerk Wendy Heffner wrote to CannaMart owners that they were in the first four, but the licensing authority ruled they were last. CannaMart sued and has been operating without a license ever since.

“It’s not the wild, wild West out there,” owner Stan Zislis told the authority, saying they remain open under court order. “It’s all legal.”

Zislis said the city attorney approached him with the deal last October after one dispensary closed, leaving an available license. Under the agreement, CannaMart will move to a new location, 1080 W. Littleton Blvd., qualifying it to apply anew. It will build out the space to conform to all state and local requirements for a dispensary, then apply to transfer its state license to the new site. Once approved, it will immediately cease business at the old location at Arapahoe Road and Broadway and begin selling to patients in the new building, which Hana Designs salon has vacated but still owns.

“I tend to be a little bit more open-minded,” said Hana, who goes by just one name. A breast-cancer survivor herself, she uses edibles to cope with the aftermath of the disease, including insomnia. A main focus of her business is styling for women with medical conditions that affect their hair, and she carries an extensive line of wigs.

CannaMart is leasing the entire 4,000-square-foot building from Hana, who moved across the street into the former Baker Interiors building. CannaMart will sublet half of it back to itself, conforming to the 2,000-square-foot legal limit on dispensaries.

Coincidentally, the state task force working on how to implement Amendment 64 just recommended allowing dispensaries and retail pot stores to operate out of the same building, as long as they are separate businesses with distinct entrances.

“Our plan would be to stay on top of the game,” said Zislis.

Zislis said business has grown every year. Since opening, they’ve paid about $1.2 million in wages and more than $107,000 to the city in sales tax.

“We want to continue serving the Littleton community,” he said. “The only reason we’re really moving is to comply with the city ordinance.”

Their current landlord said they’ve not caused any problems, never been late with their rent and have been great tenants.

“Not that Littleton is a place where you have to worry about somebody pickpocketing you,” he said.