Born and bred out of our desire to send it in honor of our favorite mountain marauders, this flower will have Jerry’s everywhere plowing pow.

The only thing this indica can’t do is open a portal, but Jerry’s got that covered, anyway.

Live like a local and turn into a pro with Jerry’s OG. We insist. Please. Skis not necessary during purchase. Enjoy responsibly, and do not consume and ride.

Jerry's OG is a heavily indica dominant strain. It was created by the Silver Stem’s amazing grow team by crossbreeding Sour Kush and True OG. The former is an indica-dominant hybrid, which gave birth to a whole line of new strains and latter is a pure indica.

What Does Jerry's OG Smell Like? What Terpenes are in Jerry's OG?

The predominant terpenes include Myrcene, Limonene and Pinene. Myrcene provides that pungent "weed" smell, Limonene offers the fruity, citrusy notes and pinene is of course responsible for the pine aftertaste of Jerry's OG. 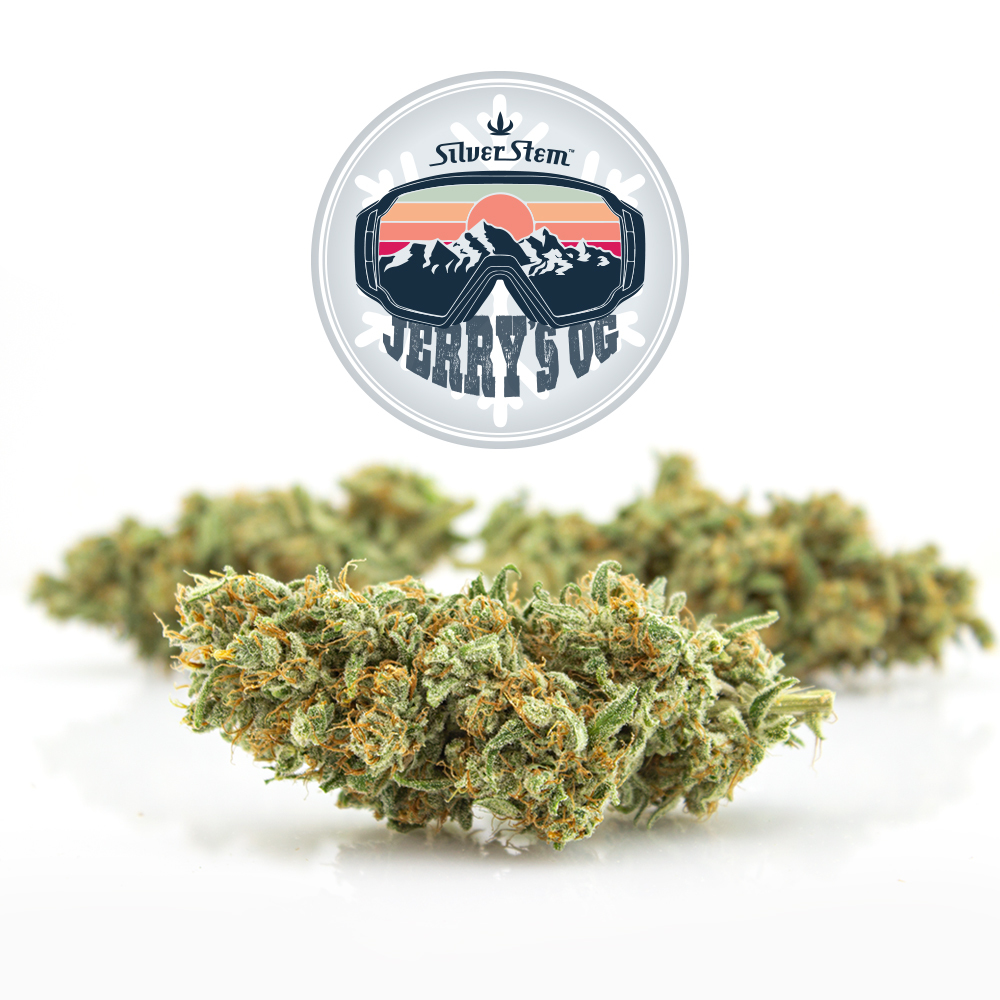 Jerry's OG has dark green buds covered with long brownish hairs and lots of trichomes. It is a great looking plant with dark green leaves and large, towering colas.

How to Grow Jerry's OG?

The strain is rather resilient but requires a lot of attention on the side of the grower. Jerry's OG is not really suitable for outdoors as it requires warmer climate and plenty of light, all of which is easier to provide indoors. The flowering usually takes 9-10 weeks indoors.

How Much THC is in Jerry's OG?

Jerry's OG THC percentage hovers around 19-22%. Our latest testing has shown an average of about 21% THC and 0.06% CBD. It is not the most potent of strains but it is not about the numbers. It is about the experience. Although, at its peak Silver Stem's Jerry's OG clocked an impressive 25.3 THC percentage.

What Are the Effects of Jerry's OG? Benefits, Negatives, Type of High

Jerry's OG effects are that of a pure indica. The body high is smooth and not racy as it often is with sativas. You will be feeling happy and trouble free in no time.

Relatively low THC percentage makes it a nice strain for beginners. The experience will be blissful and energizing.

Sever cases of munchies are not uncommon with Jerry's OG so stock up on some snacks before lighting up.

Its medical properties have been reported to be similar to its parent Sour Kush helping people with stress, pain, depression and much more. It is also great if you have trouble with appetite.

Next time you visit Silver Stem looking for a pick me up, definitely give this latest creation a try. You have to try this new sensation from Silver Stem’s grow team. Its euphoric high and an array of medical benefits are something out of this world.

Have you already tried the amazing Jerry's OG from Silver Stem?